“The pain now is part of the happiness then; that’s the deal.” -C.S. Lewis

Around this time last year, I saw a profound play about the intersecting lives of the reputable Christian philosopher, C.S. Lewis, and the equally prominent American poet and writer, Joy Davidman entitled Shadowlands; in essence, it was a play about love and loss, and their inextricable tie to one another. Some of you know that I’m an atheist, and may be wondering how I found myself viewing a Christian play in the first place. Well, I’ve been a fan of Lewis’ work since I took a college course entitled Death, Dying, and Society: A Life Crises Management Issue while I was a student at John Jay College. We engaged in a profound philosophical discussion of Lewis’ book, A Grief Observed, which the play was based on, in one of our final classes; since then, I was hooked.

So, I instantly bought tickets when I saw that the stage production of Shadowlands was returning for a limited time; and I was mesmerized by it. The play began with a powerful monologue from Lewis, in which he asserted his belief that human-suffering possessed a cosmic purpose, one which purportedly helped to bring us closer to God. Lewis spoke with the certainty of a pontiff and the eloquence of a poet; his assuredness even caused me to hesitate, for a split second, about my own philosophical framework. Everything appeared well and structured in Lewis’ world, until he finally allowed himself to experience joy.

Joy Davidman (the other protagonist in the play) was also an author; and, for a prolonged period of time, wrote countless letters to Lewis from America (Lewis lived in England at the time), prompting him to defend, and sometimes re-examine, his philosophical suppositions. She was so enchanted with his work that she impulsively decided to fly out and meet him in person, as she wanted to disocver the man behind the beautiful prose. At the time, Lewis settled into a comfortable (and boring) life, comprised of friendships, teaching, and, writing; he had decided to shun love, fearing the consequence of a devastating loss.

But, as soon as they met, you knew that his life would be changed forever. Like the Buddha, Lewis lived in a secluded world and had to leave his metaphorical castle to experience life authentically. His life was neatly packaged, until it wasn’t. Once on the outside, he learned that in order to really (and fully) live, one had to surrender his sense of safety, noting that “You don’t have to do anything. All you have to do is stop doing something; you have to learn to stop trying to preserve yourself. Once you let yourself go head first without worrying where you’re going to land, you’re a diver.” That summer, Lewis overcame his fear of diving, and he also overcame his terror of love.

Davidman eventually divorced her alcoholic, womanizing husband and moved to England with her eight year old son to start a new life with he and Lewis. And Lewis progressively opened his heart to her, forging an exhilarating love affair which mimicked the romance, and beauty, of some of the world’s most lauded novels. He realized what anxiety hitherto precluded; he became aware of how avoidance prevented him from living passionately. When he allowed himself to love, he accepted that he could be loved in return; and, in that, Joy provided him with a gift which he had spent a lifetime waiting for. Although cloaked in immense beauty, their story ended in tragedy.

Before the play’s intermission, Joy mysteriously developed severe pain and fainted, presenting a preview of the devastation and heartache that was to come. We later learned that she was diagnosed with a late-stage form of breast cancer and told that she had only several months left to live; it was then that Lewis decided to marry her. His fear was palpable; each childhood trauma lurked behind the curtain, visibly tormenting him as he attempted to muster enough courage to propose to her. But somewhere deep inside, beneath all of the hurt, the neglect, and the petrifying anxiety, he sensed that she really loved him, and he knew that it would be okay; he wasn’t sure of himself, but he didn’t have to be, because he was certain of her love. So, on a cool spring day at a hospital ward, C.S. Lewis and Joy Davidman were married, four years before she passed away.

So what are The Shadowlands? Lewis explains: “The world that seems to us so substantial  is no more than the shadowlands; real life has not begun yet.” Although obviously referring to the philosophical, and religious, ideal of the spiritual afterlife, Lewis’ life can be perceived as a shadowlands of its own, before he met Joy and after her passing. The price of love is pain, as Lewis noted in the play’s beginning, but he decided that the pain was worth it, because life without love wasn’t real. I often think of this play as I go on dates and try to meet potential partners, wondering if I was living as Lewis did, before he met Joy. My patients are often in shadowlands of their own making, as childhood trauma causes them to withhold their love, as that’s what trauma does: it barricades pain, thus, keeping love at bay.

C.S. Lewis experienced tragedy on a level that no child should ever have to endure, but he found his way out, or rather, Joy illuminated it for him. He was a remarkable man who showed us what resilience was. It could have been otherwise; Lewis could have used the early loss of ill mother and his father’s continual neglect as fodder for cruelty, but he exhibited compassion instead. And it was that compassion which brought him Joy, in both senses of the term. C.S. Lewis served as a prime example of a life well-lived, even with the heartache and devastation of an emotionally-impoverished upbringing. For each of us, especially those of us who were in that theater on that night, we learned from C.S. Lewis that we could become lovable by becoming compassionate, and we learned that love was worth the inevitable pain, always. 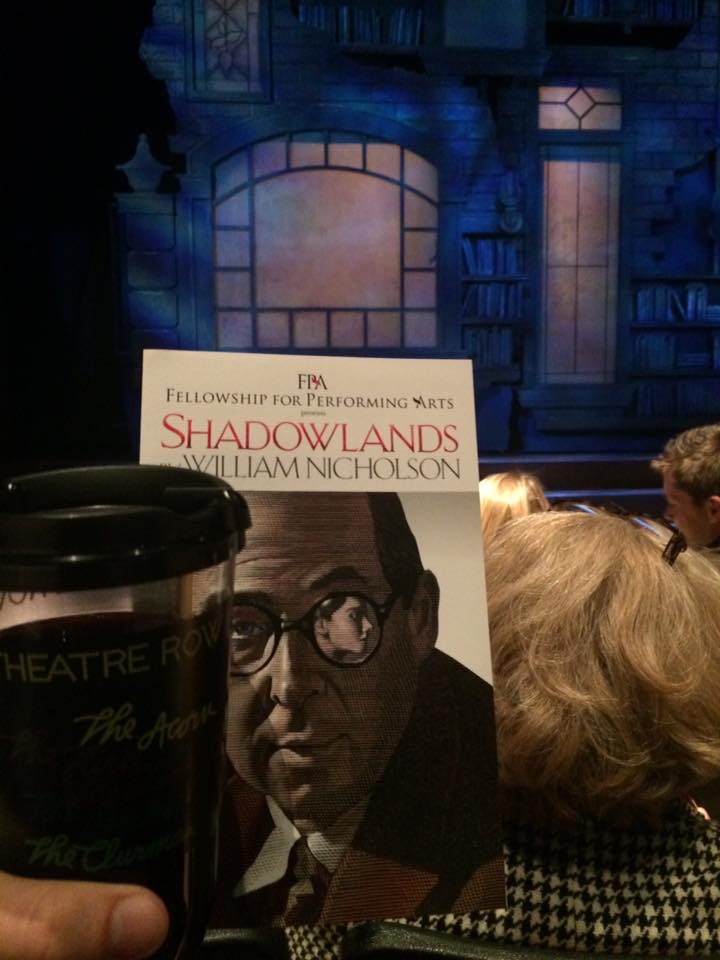